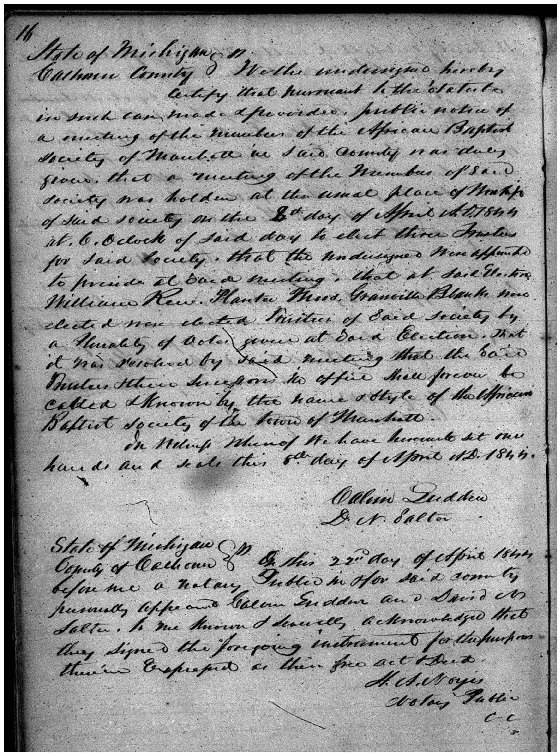 The 1844 articles of incorporation for the African Baptist Society of Marshall, Michigan.

We the undersigned hereby certify that pursuant to the statutes in such case made & provided public notice of a meeting of the members of the African Baptist Society of Marshall in said county was duly given. That a meeting of the members of said society was holden at the usual place of worship of said society on the 8th day of April A.D. 1844 at 6 oclock of said day to elect three Trustees for said society. That the undersigned were appointed to preside at said meeting. That at said election William Rew, Planter Moss, Granville Blanks were elected were elected [sic] Trustees of said society by a plurality of votes given at said Election. That it was resolved by said meeting that the said Trustees & their successors in office shall forever be called & known by the name & style of the African Baptist Society of the town of Marshall.

In witness whereof we have hereunto set our hands and seals this 8th day of April A.D. 1844

On this 22nd day of April 1844 before me a Notary Public in & for said county personally appeared Calvin Ludden and David N. Salter to me known & severally acknowledged that they signed the foregoing instrument for the purposes therein expressed as their free act & Deed.