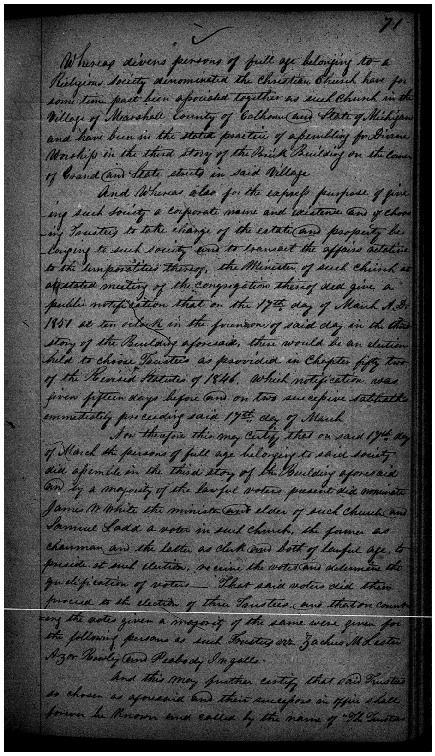 The 1851 articles of incorporation for the First Christian Church in Marshall, Michigan.

Whereas divers [sic] persons of full age belonging to a Religious society denominated the Christian Church have for some time past been associated together as such church in the village of Marshall county of Calhoun and State of Michigan and have been in the stated practice of assembling for Divine Worship in the third story of the Brick Building on the corner of Grand and State streets in said village.

And whereas also for the express purpose of giving such society a corporate name and existence and of choosing Trustees to take change of the estate and property belonging to such society and to transact the affairs relative to the temporalities thereof, the Minister of such church at a stated meeting of the congregation thereof did give a public notification that on the 17th day of March A.D. 1851 at ten oclock in the forenoon of said day in the third story of the Building aforesaid, there would be an election held to choose Trustees as provided in Chapter fifty two of the Revised Statutes of 1846. Which notification was given fifteen days before and on two successive Sabbaths immediately preceding said 17th day of March.

Now therefore this may certify that on said 17th day of March the persons of full age belonging to said society did assemble in the third story of the Building aforesaid and by a majority of the lawful voters present did nominate James W. White the minister and elder of such church and Samuel Ladd a voter in such church, the former as chairman and the latter as clerk and both of lawful age, to preside at such election, receive the votes and determine the qualification of voters. That said voters did then proceed to the election of three Trustees and that on counting the votes given a majority of the same were given for the following persons as such Trustees __ Zachus M. Lester, Azor Rowley and Peabody Ingalls.

And this may further certify that said Trustees as chosen as aforesaid and their successors in office shall forever be known and called by the name of “The Trustees the first Christian Christian [sic] Church of the Village of Marshall.”

In witness whereof the persons appointed to preside at said election have hereunto set their hands and seals this 17th day of March A.D. 1851.

In presence of Isaac E. Crary

On this 17th day of March AD 1851 personally came before me a Notary Public of said County of Calhoun James S. White and Samuel Ladd known to me to be the persons who signed the foregoing instrument and acknowledged the same to be their free act will and deed for the purposes therein mentioned and set forth.