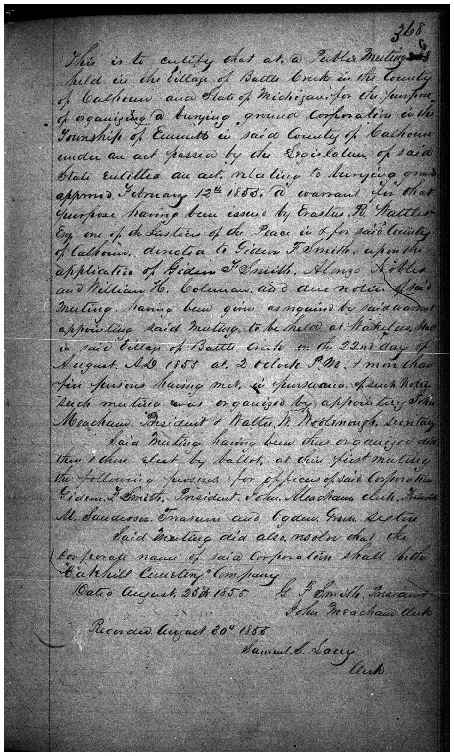 The 1855 articles of incorporation for the Oakhill Cemetery Company of Emmett Township, Michigan.

This is to certify that at a Public Meeting held in the Village of Battle Creek in the County of Calhoun and State of Michigan for the purpose of organizing a burying ground corporation in the Township of Emmett in said County of Calhoun under an act passed by the Legislation of said State entitled an act relating to burying ground approved February 12th 1855. A warrant for that purpose having been issued by Erastus R. Wattles Esq. one of the Justices of the Peace in & for said County of Calhoun directed to Gideon F. Smith upon the application of Gideon F. Smith, Alonzo Nobles, and William H. Coleman and due notice of said meeting having been given as required by said warrant appointing said meeting to be held at Wakel___ Hall in said Village of Battle Creek on the 22nd day of August A.D. 1855 at 2 oclock P.M. & more than five persons having met in pursuance of such notice such meeting was organized by appointery John Meacham, President & Walter W. Woolenough, Secretary.

Said meeting having been thus organized did then & there elect by ballot at their first meeting the following persons for offices of said corporation Gideon F. Smith, President, John Meacham, clerk, Frederick M. Sanderson, Treasurer and Ogden Green, sexton.

Said meeting did also resolve that the corporate name of said corporation shall be the “Oakhill Cemetery” Company.