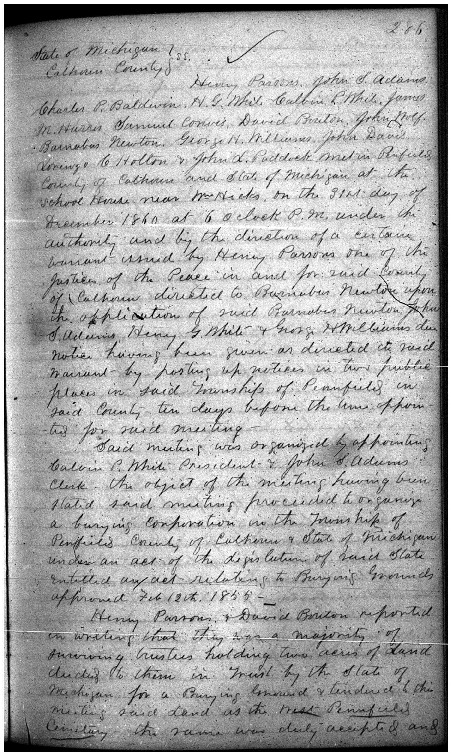 The 1860 articles of incorporation for the West Pennfield Cemetery.

Henry Parsons, John S. Adams, Charles P. Baldwin, H. G. White, Calvin P. White, James M. Harris, Samuel Convis, David Bouton, John Wolf, Barnabas Newton, George H. Williams, John Davis, Lorenzo C. Holton & John L. Paddock met in Penfield [sic] County of Calhoun and State of Michigan at the school house near Wm Hicks on the 31st day of December 1860 at 6 o clock P.M. under the authority and the direction of a certain warrant issued by Henry Parsons one of the Justices of the Peace in and for said county of Calhoun directed to Barnabas Newton upon the application of said Barnabas Newton, John S. Adams, Henry G. White & George H. Williams due notice having been given as directed the said warrant – by posting up notices in two public places in said township of Pennfield in said County ten days before the time appointed for said meeting.

Said meeting was organized by appointing Calvin P. White President & John S. Adams clerk. The object of the meeting having been stated said meeting proceeded to organize a burying corporation in the township of Penfield [sic] County of Calhoun & State of Michigan under an act relating to Burying Grounds approved Feb 12th, 1855.

Henry Parsons & David Bouton reported in writing that there was a majority of surviving trustees holding two acres of land deeded to them in trust by the State of Michigan for a Burying Ground & tendered to this meeting said land as the West Pennfield Cemetery. The name was duly accepted and when this corporation shall be constituted to use occupy said land the name being on section 16 in Pennfield and now used as a Burying Ground.

The meeting then provided to choose the following officers by Ballot viz. President Clerk Treasurer & Sexton.