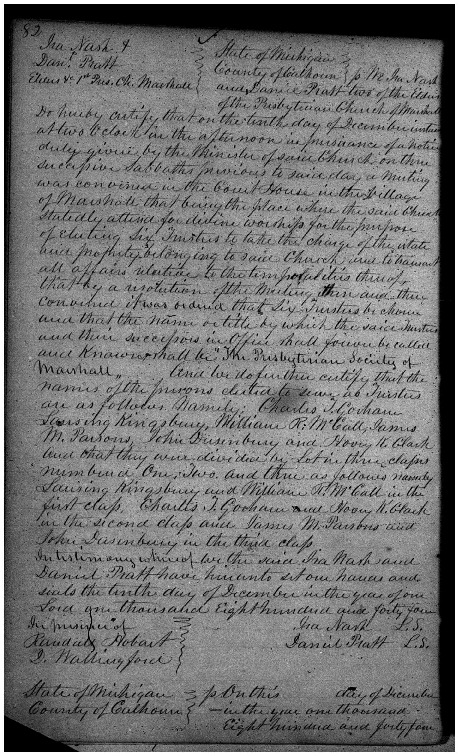 The 1844 articles of incorporation for the Presbyterian Society of Marshall.

State of Michigan
County of Calhoun

We Ira Nash and Daniel Pratt two of the Elders of the Presbyterian Church of Marshall do hereby certify that on the tenth day of December ____ at two o’clock in the afternoon in pursuance of a notice duly given by the Minister of said church on three successive Sabbaths previous to said day a meeting was convened in the Court House in the Village of Marshall that being the place where the said Church statedly attend for divine worship for the purpose of electing six Trustees to take the charge of the ____ and property belonging to said Church and to _____ all affairs relative to the temporalities thereof that by a resolution of the meeting then and there convened it was ordered that six Trustees be chosen and that the name or title by which the said Trustees and their successors in office shall forever be called and known shall be “The Presbyterian Society of Marshall.” And we do further certify that the names of the persons elected to serve as Trustees are as follows namely: Charles T. Gorham, Lansing Kingsbury, William R. McCall, James M. Parsons, John Dusenbury, and Hovey K. Clark and that they were divided by Lot in three classes numbered One, Two, and three as follows namely Lansing Kingsbury and William R. McCall in the first class, Charles T. Gorham and Hovey K. Clark in the second class and James M. Parsons and John Dusenbury in the third class.

In testimony whereof we the said Ira Nash and Daniel Pratt have hereunto set our hands and seals the tenth day of December in the year of our Lord one thousand Eight hundred and forty four.

On this day of December in the year one thousand Eight hundred and forty four before me a Justice of the Peace in and for the said County came Ira Nash and Daniel Pratt whom I know to be the persons who subscribed the above foregoing instrument and acknowledged the same to be their free act and deed.

Randall Hobart, Justice of the Peace